No, this crypto crash is not like the dot-com burst 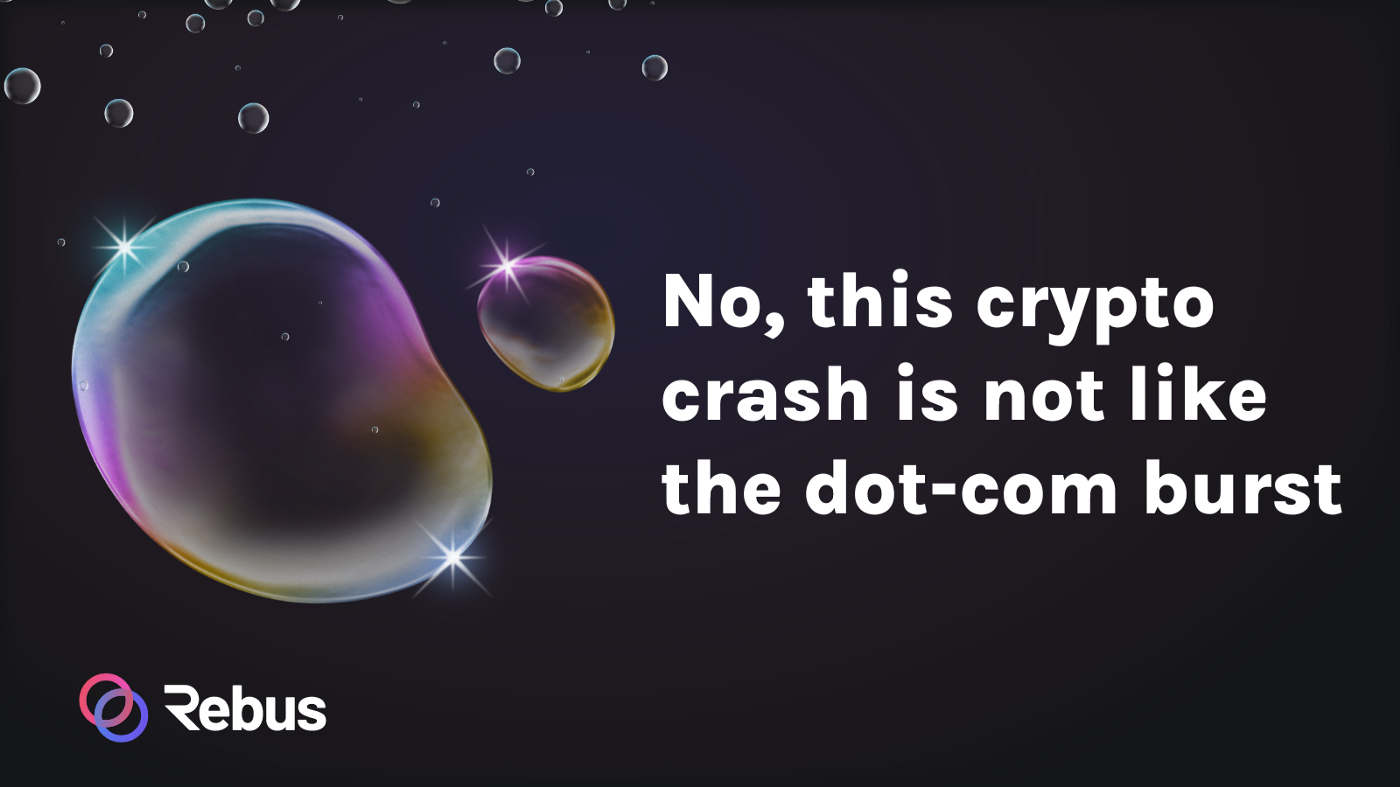 Most headlines today use inflammatory language to describe…everything. The recent crypto crash is no exception. To be fair, it’s not all wrong, but it is misleading. There have been some major blunders (woof, Terra) and an overall crash in value for key players. But comparisons to the dot-com bubble burst and predictions of the “end of crypto” are wrong. We fully acknowledge that a double-digit drop of an index in a short time can and should be called a crash. While there are some overlapping themes, there are major differences between the drop in crypto today and the market bubble bursts of yesterday.

First, it’s important to understand new technology adoption theory as it is well studied and accepted. The internet’s adoption in the late 90s and early 2000s is a prime example. Thousands of new users were joining every day, up to 27,000 per hour at its peak. Just imagine 27,000 new users entering your site every hour, now imagine them all buying something. That’s hyper-adoption. The internet grew from 3 million users in 1991, when the first webpage was published, to over 400 million in 2001 when the Dot-Com bubble burst. A staggering average of 121,000 new users daily over the nine-year span. The hyper-adoption phase lasted from 1997–2000, when the internet grew from 70 to 400 million users, averaging 300,000 new users every day.

Of course, the internet required infrastructure on top of user devices and training to scale. The value of the internet required more adoption before it would become flooded with new businesses and subscribers alike. Simply put, the slow growth at the beginning was due to the efforts to simultaneously reduce complexity (barriers to entry/adoption) and increase utility and value. Once more accessible and valuable, a great rush to the market began. The market became oversaturated with a supply of still speculative value propositions funded by cheap venture capital money that dried up once interest rates began to rise and speculations failed to pan out. The weak went out of business or were acquired by the remaining strong players.

Furthermore, new technology adoption cycles often work on a FIFO basis (First in, First out). First movers are the first to discover limitations and make mistakes. For example, there were other mp3 players (MS Zune) far before Apple entered the space, but it was the iPod that became synonymous with “mp3 players”. They learned from the shortcomings of those previous products and made the accessibility and utility of their mp3 player apparent to a large market segment, and dominated the space. Similarly, look at the recent issue with Terra Luna’s stablecoin UST. They were among the first algorithmic stablecoins at scale, and we are all still processing the learnings from that debacle. With this in mind, how can we confidently assess how far along a specific technology is, such as the crypto-sphere, in its adoption lifecycle?

Humans are tool builders and constantly improve upon existing tools. The earliest players or ‘innovators’ lay the groundwork for the early adopters to build on, followed by the early majority and so on. We saw this with the internet’s adoption as it shifted from Web 1 to Web 2, expanding the utility and use cases of the internet whilst reducing barriers to entry. However, reckless funding of speculative ideas that neglect the fundamentals is a sure way to create a bubble. Innovation is hard and should never be the bulk of an economy or product strategy. However, the fact that we must identify the 2022 crypto crash as separate from the 2018 crypto crash shows one of the significant differences between previous market bubbles and what’s happening with crypto.

The dot-com bubble burst impacted the global economy whereas the global economy impacted crypto. The current and previous crypto crashes as well as the dot com bubble happened within two wildly different global conditions. The similarities are that both events were preceded by cheap money which flooded speculative markets, and that’s where it stops. Today, global markets are reeling from a two-year-long covid slog that triggered rampant global unemployment, unprecedented global excess death volumes, supply chain issues, and extraordinary government spending, all of which have contributed to the problematic and still worsening inflation rates. Over $16 trillion US dollars were printed between 2020–2022, over 80% of all dollars in circulation. COVID shutdowns put our global supply chains on pause causing buying frenzies of everyday goods. Just as we thought it couldn’t get worse, Russia delivered icing on the metaphorical cake by declaring war on their neighbor, Ukraine. The ensuing global oil shortages from this conflict are still rippling across global economies, exacerbating the inflation rates and reducing the purchasing power of working-class people. While it certainly has hit expected new tech volatility, the adoption of crypto is still in its infancy, as compared to the dot-com bust, which had already experienced hyper-adoption through the early and late majority of the addressable market. I’m sure you’re tired of hearing the same timeline repeated over and over. So how does this make the current crypto crash any different from the dot com bust? What we’re trying to say is the whole market is down, crypto along with it.

Although the current crash is severe, cryptos adoption is still comparable to the early 90s of the internet, still developing and proving utility while making progress in reducing barriers to entry. Following the same trajectory the internet took but several years behind, crypto adoption has seen a multitude of mini and severe crashes within its 13 years of existence. Crypto adoption may seem like it’s on par with the Internet, but statistics say otherwise. The internet had over 400 million users after nine years (1991–2000) whilst in the same time frame (2009–2018) only 27 million blockchain wallets were active, and total crypto investors reached 292 million by Nov 2021*.

Bringing us back to our main argument, investors during the Internet’s hyper-adoption made reckless decisions with cheap money that didn’t pan out when interest rates rose and speculations failed. The two landscapes and mindsets of investors were unimaginably different. Investors in the late ’90s were awestruck by the newfound technology, throwing money at anything with a website. Crypto investors are a new breed with overlapping but different motivations, one of which could be described as ‘survival.’ To demonstrate the sheer volume and comparison of investment, in 1999, 39% of all venture capital investment went directly into the internet companies. The crypto markets on the other hand received a measly 4% of all venture capital investments in 2021. The dot com burst happened out of investors’ own greed, blinded by the thought of the potential quick and limitless gains.

What about the Terra-luna/UST crash?!

Of course. How could we neglect to address such a massive headline? The short of it is this: it’s a black eye for the industry and a retrospective on the philosophy behind stablecoins is certainly in order. But, if Theranos didn’t destroy med-tech, there’s no reason to look at the Terra Luna dumpster fire and think it will end crypto. It certainly gives pause to the entire market, especially when belts are already being tightened due to the global economic woes described above. The truth is that progress is still happening and this failure serves as another valuable lesson for us all.

Since its inception, blockchain’s evolution from virtual-machine-based blockchains like Ethereum to the likes of application-specific blockchains has already enabled reductions in complexity and improvements in utility. Another new factor that people often forget is that personal investment is easier than ever with the current resources and knowledge available on the internet. When the internet was coming to age, no such resources were available and hence, the majority of investment was done through asset managers and organized investment firms. Today’s investment landscape is being reshaped by a growing number of well-educated, “retail investors.”

On top of a wildly different global landscape, both crashes occurred at opposite ends of the tech adoption cycle. When the Dot-Com burst happened in 2001, adoption had already reached the late majority and was beginning to saturate supply. Crypto, on the other hand, is still solidly in early adoption, waiting to cross the chasm into an early majority and eventual hyper-adoption phase. Was this a crypto crash? Sure. Is it similar to the dot-com bubble? Only if we’re not being honest with ourselves. Crypto has a long way to go before it becomes the cause of an economic downturn, as the housing and dot com bubbles were. To this point, crypto is simply a volatile new tech market also victimized by a global recession.