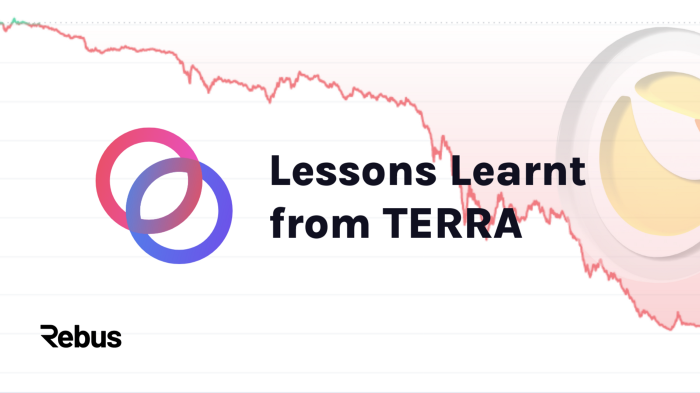 Spring 2022 was rough on all markets, crypto included. We discussed the impacts of the global market downturn, but the LUNA/UST crash is a problem in and of itself and demands individual attention. In any new technology market, we will find limitations, bugs, etc., as the early adopters strive toward a product-market fit. It’s also common to find bad-faith promises from organizations looking to benefit from the market’s hype versus adding real value to it. We’re going to briefly analyze the UST implosion from the perspective of individual investors, crypto project teams, and analysts in hopes of avoiding repeat catastrophes.

What is a stablecoin? How does it work? Purpose?

Before we jump into TERRAs backstory, let’s review the role of stablecoins in the crypto market. A stablecoin is a virtual currency pegged to the value of a real-world asset, such as the US Dollar or Gold. The idea is to nullify cryptos’ inherent volatility. Large Stablecoins such as USDT claim to be fully backed 1:1 to US dollars, making them a ‘risk-free’ volatility killer, although some argue otherwise.

On paper, it sounds feasible, but many never saw it that way. With free-market arbitrage, traders are always incentivized to keep $USTs price at $1; otherwise, another trader scoops up the easy profit. Profit, provided they sell their newly acquired LUNA or UST immediately. That’s the catch; tokens are sold immediately to lock in realized gains, which is precisely what happened — this will become important later. Such a method allows them to realize their vision of completely detaching themselves from centralized assets, so what went wrong?

How did it grow? What went wrong?

However you want to call the economics, or ponzinomics, behind UST and LUNA, they work great in a bull market with a constant influx of new investors ready to speculate on the hottest new project. LUNA and UST grew to unmatched heights, amassing a valuation of over $50bn at their peak. However, what happens once the hype dries up and new investors realize prices don’t go up forever?

Traders facilitating the LUNA — UST arbitrage mechanism realized this problem as they all sold their new LUNA tokens immediately to seal their gains. But when no new investors bought those tokens, the amount of selling pressure created was immense, causing LUNA and UST to enter what is known as a Death Spiral in the crypto markets.

Before the crash, $UST was being heavily bridged to other cryptocurrencies to make it the most accessible stablecoin — rewards were given to UST users on different blockchains for their participation. The increased demand for $UST constantly pushed it above $1, meaning arbitragers could buy and burn LUNA for a small profit. With more and more UST being minted, LUNAs circulating supply slowly began to shrink. This entailed basic supply and demand economics, causing LUNAs price to increase steadily.

The reason why that backstory was necessary was to demonstrate what led up to the crash. With LUNAs supply reduced, a massive influx of new liquid LUNA, minted by converting $UST, would hugely affect its price. Here’s what happened next:

A giant $285 million $UST dumping by an anonymous whale on Binance and Curve finance saw UST dip as low as $0.98, losing its peg and causing LUNA to lose 20% of its value overnight. It’s speculated that it was a coordinated attack but not confirmed. Instantly, retail investors and large organizations like Celsius began to pull their UST from Anchor. For reference, Anchor protocol is a borrowing protocol attached to the TERRA ecosystem; read more here. Anchors UST stores dropped from $14bn to $5bn in 48 hours following the de-pegging news, causing $UST to further fall below its peg. As we mentioned, this made it easy for arbitragers to make a quick buck, provided they instantly sell their LUNA, and that’s precisely what they did.

The TERRA ecosystem attempted to create an ingenious plan to prevent said death spiral with its $10bn in Bitcoin reserve plan. If $UST was to fall below its peg, it was expected that traders, instead of converting into LUNA, would convert each UST for one dollar worth of BTC.

However, that plan never came to fruition. The Luna Foundation Guard ended up selling over 80,000 BTC in an ultimately futile attempt to save $USTs peg. By Friday the 13th, both LUNA and UST were officially flatlined.

What could have prevented it? If anything.

Once the TERRA ecosystem was fully formed, it was considered too big to fail. When a project’s ecosystem is worth over $50bn, and you see everyone else falling in line, it’s hard to think critically and not follow the herd. FOMO was key to LUNAs ascent and subsequent downfall. TERRAs ecosystem was so deeply embedded into the crypto-sphere that even Binance activated UST staking. So what could have prevented LUNA and UST’s collapse, if anything?

The initial events which led up to LUNAs death spiral were caused by what some would call ‘circumstantial evidence’. How could a whale big enough to disrupt $UST know precisely when the TERRA team were pulling over $85 million $UST from Curve? On top of this, why would anyone in the crypto-sphere want LUNA or UST to fail — millions of individual investors and thousands of projects were knee-deep in UST and LUNA. Many projects even staked their entire treasury on anchor protocol.

Many of the biggest names in the crypto-sphere, including Binance’s CEO Changpeng Zhao, believe recovery could have only occurred if the Luna Foundation Guard sold their Bitcoin reserves more proactively to stop $USTs freefall after the initial de-pegging event. But that doesn’t answer our question of prevention. Ultimately, if a $50bn project hangs in the hands of a singular $300 million attack and resultant retail and organizational panic, is there anything you can do to prevent it. We won’t pretend to have all the answers. But the event triggers hard questions. Namely, does this disprove the whole algorithmic stablecoin concept? Or do we have learnings for the next iteration?

As painful as the subsequent crash has been, a collapse as public and of the size of LUNA grants developers and investors alike some valuable lessons:

First, as an investor, do your own research and understand the risk you’re taking on by investing in new technology. Be aware that you are entering a high-risk, high-reward market. The journey will be full of twists, turns, backtracks and summits. Do not invest what you cannot lose.

Secondly, atomize yourself away from excessive dependencies. We built Rebus within the Cosmos ecosystem as we believe interoperability is the future of crypto and our product relies on it. However, we utilized their application-specific blockchains to avoid complete reliance on others. Meanwhile, hundreds of projects lost their entire treasury as they were deeply involved with UST, LUNA and Anchor protocol, regardless if they had any say in their governance.

Even the most prominent organizations, such as Celsius, failed to do this and were heavily dependent on rewards from TERRAs anchor protocol to pay their users, ultimately leading to their downfall.

On a side note, avoid making enemies in the crypto sphere at all costs. It’s still unsure who coordinated the initial ‘attack’ on UST but who knows; maybe if Do Kwon were less hostile, the perpetrator would have had a second thought.

Thirdly, relying on free-market conditions such as arbitrage, which ultimately requires the conductors to sell your native token, can only work at scale if ample new liquidity is coming into the market. Once the ‘next man’ stops piling in, your ‘perfect system on paper’ will soon come crumbling down.

Lastly, if there’s a singular takeaway from this entire debacle, stop offering unsustainably high rewards rates. If an ecosystem with $50bn in value cannot maintain a 20% APR, it’s unlikely anyone can. Our Rebus vaults will offer sustainable yields to attract even the most risk-averse TradFi investors.

The crypto community has come too far to continue investing in lottery tickets and avoid projects adding direct value and utility to this beautiful community. We should all strive for new use cases to continually prove crypto’s worthiness as an asset class and investment if we’re to entice the untapped legions of traditional investors waiting on the sideline.

Fortunately, platforms like Rebus will provide an additional filter against such risks by allowing participating banks and asset managers to have the final say in which projects will or will not be offered to their clients, based on paid, professional research and analysis–a benefit we will touch on in more detail in a later article.

Want to learn more about the Rebus Platform?
Get insider access by registering here.